The Gallaudet Microgrid is a Turning Point for our Industry

The microgrid that Scale is constructing at Gallaudet University, the world’s premier institution of higher education for deaf and hard of hearing students, would have been almost unthinkable just a few years ago. Microgrids have long been the playthings of research universities and military installations due to their complexity and expense. They have been cobbled together using a variety of generating technologies, from solar cells to fuel cells to microturbines, and a wide array of control platforms and protocols that have to be patched together into an often-clunky microgrid control system. What we’re currently constructing at Gallaudet is a system that would dwarf the microgrids of the past.

Gallaudet University, situated on a serene 99-acre campus in the heart of Washington, D.C., entered into an agreement with Scale in 2019 to design and construct a behind-the-meter microgrid on its campus. This microgrid would leverage both existing utility feeders and a host of Distributed Energy Resources (DERs) to meet much of the campus’ energy needs, all while reducing greenhouse gas emissions and generating a positive economic value for the university. In addition to constructing the microgrid, Scale and its partners undertook a sizable effort to modernize the university’s electrical distribution system.

The microgrid consists of a host of recognizable DER technologies including 2.5 megawatts of solar photovoltaic panels spread across numerous campus rooftops and parking garages, a 1.2MW/2.5MWh Tesla Megapack, and 4.5MW combined cooling, heat, and power (CCHP) system. Advanced microgrid controls ensure that these components work seamlessly together and with the broader power grid.

The solar arrays will be enrolled in an innovative program called Community Renewable Energy Facility (CREF). Through this structure, the energy produced by these rooftop arrays will be utilized and metered locally at the buildings on Gallaudet’s campus, but customers can buy into the program and get credits on their energy bill. This structure allows the solar arrays to directly benefit both Gallaudet and subscribers in the community.

While the DERs are well-understood technologies individually, their integration into a single, cohesive microgrid system is a complex engineering challenge.

The primary challenge of any generation system lies in the balance between generation (power produced) and demand (power consumed). The analogy I learned at the start of my career was to compare a power system to a Pez candy dispenser: when you insert a candy at the bottom (energy in), a candy has to come out the top (equivalent energy out). The amount of total system energy (Pez in the dispenser) remains constant. A microgrid behaves the same as any power system; in order to maintain balance, generation and demand must be equal at every second of every day. Managing that system stability with a variety of assets that behave differently is a delicate act. On a university campus, demand is generally highest during the day, when classes are going on and labs are conducting research. This coincides well with the availability of sunlight for solar power production. But how do we design our power system for variances in weather patterns that affect our solar production minute to minute? That is where the CCHP system and Tesla Megapack come in. The system can be adjusted to match a moving setpoint by the microgrid control system in real time, allowing them to respond quickly to real-time changes in demand, or to mask a sudden reduction in solar output caused by a storm. The battery energy storage system, with its ability to change output (or input) nearly instantaneously, helps to smooth the generation profile and ensure system stability. 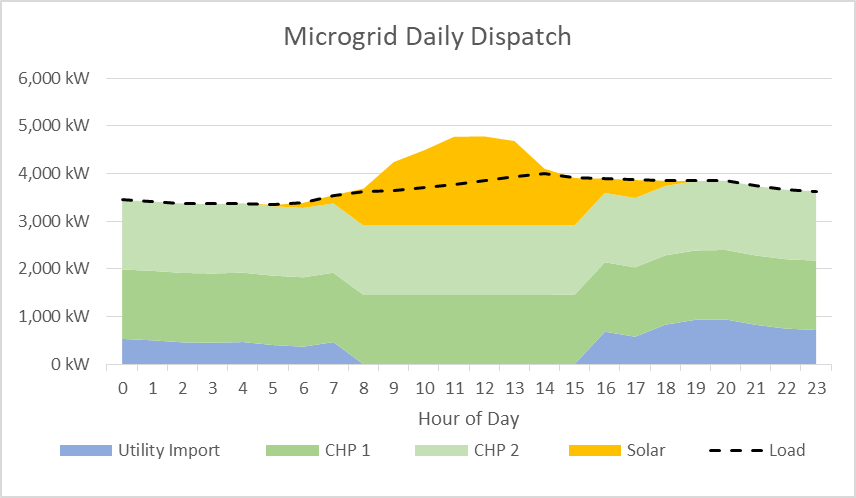 When the Gallaudet University microgrid is complete, it will represent a major leap forward in the development of behind-the-meter microgrids, with long-lasting financial and environmental benefits for the university  community and lessons that can be applied across the C&I sector.

EV-charging microgrids are worth more than the sum of their parts. Here’s why

Take the first step toward energy independence with Scale Microgrids.