Our infrastructure was not designed for the new world we face.

In six months we’ve seen two black swan weather events cause an energy crisis. As we reckon with the systems engineering impact of extreme weather, energy resilience will undoubtedly emerge as an essential underpinning of our future grid.

The first of these events was in August of 2020. A multi-state heat wave led to blackouts in California when the power system operator couldn’t secure adequate generation to meet immense air conditioning loads. Temperatures exceeded 121 degrees in LA County, the highest ever recorded. For reference, the most conservative value offered by the American Society of Heating and Cooling Engineers (ASHRAE) for designing air conditioning systems in the area is 91.4 degrees, which is supposed to cover 99.6% of hours in a year. The 50-year historical data set that recommendation is computed from has a absolute maximum value of 110.8, meaning what happened in August was, for all intents and purposes, essentially deemed so incredibly improbable it wasn’t worth considering. The 28.6 degree delta between the conservative design recommendation and the actual recorded August 2020 temperature is the difference between a nursing home’s air conditioning just barely keeping up and utterly failing.

The second event is happening as we speak. A massive winter storm is delivering crushingly low temperatures across much of the US. Texas, most of which currently does not have power, is being hit the hardest, not necessarily in absolute temperature, but relative to their typical winters. Monday hit a high of 15 F in Dallas, whereas generally you’d expect around 55 F during this time of year. And Monday’s low of 5 F is extremely cold for a city with an ASHRAE 99.6% heating design temperature of 24.6 F. Even those who haven’t lost power and have functioning heating systems are still likely quite cold, while many homes are simultaneously facing electricity, heating, water/sewage, and telecommunications outages. And as of Tuesday, outages began to spread to neighboring grids such as the Southwest Power Pool and Midcontinent Independent System Operator. 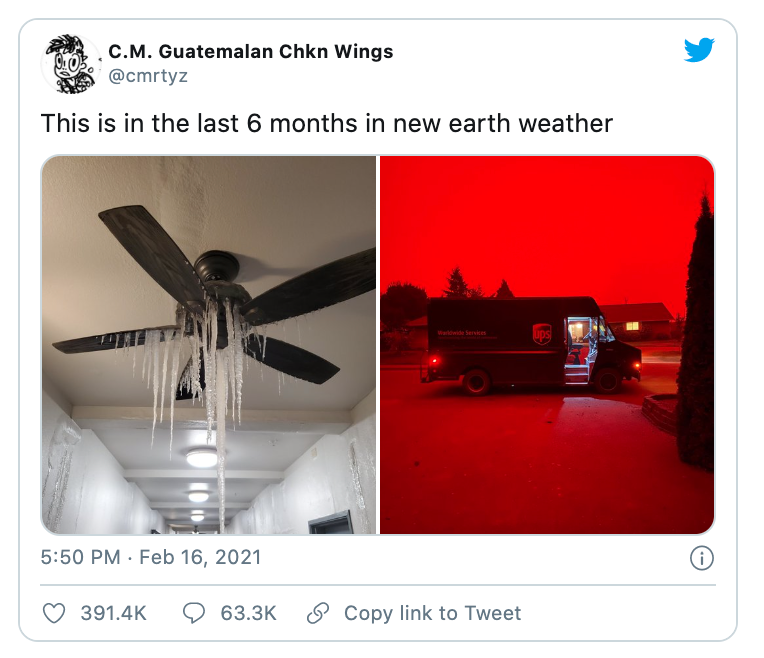 While it's easy to see why an HVAC system wouldn’t hold up during either of these conditions, exactly why this extreme weather led to energy crises isn’t as intuitive. In each case there were a multitude of contributing factors ranging from engineering, to operations, and even communication issues, all of which are likely to be debated for some time.

For example, right now in Texas many wind turbines are frozen and unable to spin because their developers didn’t purchase the cold weather package offered by manufacturers. Yet it turns out that this was a very small factor in the blackouts; many more conventional power plants also can’t cope with the cold, leading to a far greater contribution to the blackouts. Additionally, natural gas is being prioritized to heat people’s homes since it is so cold, which leaves the remaining natural gas power plants unable to procure the fuel they need to operate. The subsequent rolling blackouts required to keep at least some of the grid operating then in turn leave those with electric heating systems in the cold. Trying to keep people warm results in making other people cold. Confusing, right?

As of Monday the Texas grid had over 30 GWs of expected power generation that didn’t deliver, mostly conventional plants. For scale, the entire country of Spain’s peak electricity load was 40 GWs in 2018. An entire country’s worth of power plants are shut down in one US state because it’s colder than we expected.

It is also important to note that these are not the only recent system failures from extreme weather. Generally, the term energy crisis is used when there is not enough supply to meet demand, which was the case for the two events above. But we have also seen many typical outages resulting from failures in the transmission and distribution system, where we had enough power but we just couldn’t get it to people. For example, in July of 2020, Hurricane Isaias left millions without power, for some lasting over a week, in the middle of a pandemic.

Observers of this situation can have nuanced debates about it’s implications: does this show the harsh side of deregulation, should gas plants be considered unreliable, or was Rick Perry’s dream of giving coal plants credit for their on-site fuel storage not as silly as many thought? There’s plenty of important and interesting post-mortem analysis to be done here, but there is one key consideration that ought to dominate the conversation following this disaster.

Our infrastructure was built for our past, not our future.

The bottom line is that complex systems often aren’t great at responding to events that weren’t contemplated in their design. When stressed beyond its capabilities, failure in one component can cause cascading failure throughout the system. And as these systems become both more complex and exposed to more extreme conditions, this risk intensifies. We have a century’s worth of infrastructure that is simply unprepared for a changing climate. It is going to fail more often and more spectacularly.

With this in mind, resilience will be a critical feature of energy systems moving forward. Our grid must be able to withstand more extreme conditions, while delivering more services (the electrification of heat and transportation), and it must be able to bounce back when things go wrong.

And this issue is not just one for the power system to deal with. Yes, rolling blackouts have swept across Texas and power prices are pegged at $9000/MWh, but natural gas is also in short supply and prices are through the roof, oil wells are frozen and inoperable, a nuclear plant has shut down because its turbine was built without protection from the elements, and the largest oil refineries in North America are closed -- all simultaneously and all due to one extreme weather event.

But why haven’t we already addressed system resilience? After all, we’ve known about climate change for decades now. Beyond the general confusion and polarization of the topic, why aren’t the alarm bells ringing? I believe there are two causes of this: we have trouble imagining the need for resilience in the near term and we’d like to pretend we don’t have to deal with its cost.

But adaptation, for which improving resilience is the largest element, has taken a back seat. I believe this is because climate change feels far off. When we contemplate the impacts of a warming world and how it will stress our systems, we imagine worst case scenarios 150 years from now where the earth is unimaginably different from today. However, we tend not to consider all the ways society will be impacted by even slight climate change. Everything we’ve built our society on top of has been predicated on a stable climate, a narrow band of weather conditions, and even small changes can lead to dramatic outcomes. There are millions of Texans who now know this with first hand experience.

Additionally, even if one recognizes the urgent need for resilience, it can be difficult to discuss because addressing it carries a cost. Consider how the narrative surrounding mitigation has changed in recent years. Now that solar and wind are the cheapest form of new electricity, suddenly there is immense support to build more of it. It is far easier to pitch emissions reduction when it also carries a cost reduction. But with resilience, this often isn’t the case. It is intuitive that a stronger power system built to operate through more extreme conditions may also cost more, just like a four-wheel-drive car costs more. But what we conveniently ignore is that unaddressed resilience needs, across all of our infrastructure, will create a far higher societal cost.

Luckily, there is reason to have hope. In a following post I will describe how, alongside other grid hardening activities, distributed energy resources are poised to address this massive challenge and deliver immense societal benefits, and it can actually save us money if we make the right investments. A few recent developments in the distributed energy ecosystem make this incredibly clear and offer a transformative solution.

In the meantime, let’s all follow the situation in Texas closely and do what we can to help people get through this difficult time.

Scale Microgrid Solutions is pleased to announce a partnership with NPower Link, LLC